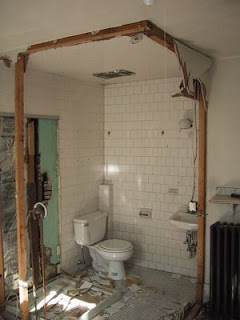 It was bound to happen. I was making decent progress on my Roubo workbench, so I knew something was going to break the streak. And it did happen, and it happened hard. It wasn't just a little interruption, but a full-scale break. And what is this interruption? It's a full bathroom remodel.

I've been through this before so it's nothing new. Perhaps that's the worst part, I'm fully cognizant of the mess I'm getting myself into. I was having flashbacks, to February of 2002, as I was ripping down walls in my 1890's Victorian to a similar project in my earlier home, a 1865's worker's cottage. As you can see from the photo, I had ripped down walls and removed all the fixtures. I didn't stop there though, as I needed to shore up the floor and level it. So I removed the floor and subfloor and laid down new floor joists and proceeded to rebuild a new floor. As you can see from the second photo, it was a huge mess for a while! Note that the second photo is showing the same area as the first, it was only taken about 4 feet to the right of the first.  One cool find during the demolition was a bunch of old coins -- the oldest from 1801.

My current bathroom remodel will encompass a lot of similar tasks. However, the floor is in decent shape so I only need to rip out some of the old oak flooring and bring it down to the subfloor so I can lay down some tile. I think the worst part will be putting in the new window. If the cold snap doesn't break soon, it'll be a chilly job installing it in the freezing cold. 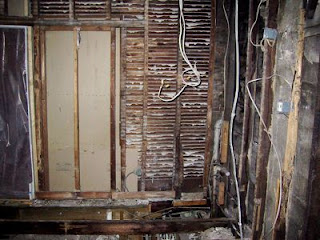 So, I'll be busy with my new project for a little bit -- the bench will have to wait. I'm sure I'm not the only woodworker who has to don another hat - that of a general contractor -- from time to time. There's definitely a good side to all of this -- I was able to rip apart my old makeshift bench and throw it into the dumpster I got for this project so when I'm done with my new bench there will be plenty of space for it!
Labels: bathroom demo demolition remodel workbench 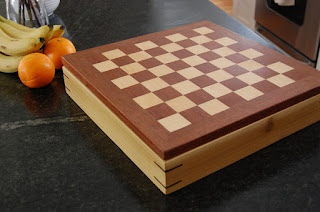 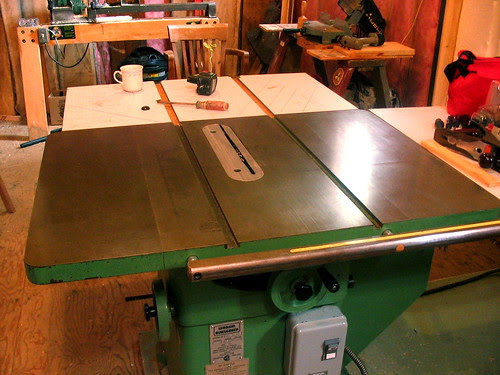